How Peppa Pig expand market share in the China market this year?

【Ctoys.com.cn At 2016,Peppa Pig, a famous pig character form UK is getting popular in China. It is an educational cartoon about family and friendships. When it entered to the China’s market in 2015, the number of broadcasting channels is growing soon. At the same time, its derivatives are also rapidly spreading in the market, this is an important push to get “Peppa Pig” into a hit. King Bee Limited. As the master licensee of “Peppa Pig”, King Bee makes a great contribution to the development of the domestic market for its derivative toys.

Both King Bee and the licensor of Peppa Pig, Entertainment One (“eOne”), has high expectations for the continued development of the cartoon and related toys in the Chinese market. King Bee also plans to launch products suitable for different channels in response to the diversification of the market for domestic markets this year.

“13 years ago, Peppa Pig has been a cartoon of family education after broadcasting in the UK. After entering to China, this topic also welcomed by parents and children, this is one of the key to the popularity of it.” Said by John Tong, actually, King Bee has done a lot of efforts to promote Peppa Pig in China. “before ’Peppa Pig’ broadcasting in China it has been broadcasting to Hong Kong and Tai Wan, in Tai Wan, it’s Translated title was ‘Pink Pig’.” But entering to Mainland, we need a localised and more neutral translate title, to absorb a wide range of concerns. The licensor eOne is also agreed to the proposal, end of the tile of ‘Xiao Zhu Pei Qi’.

The animation was officially launched on end of 2015, followed by a series of promotional activities. According to John Tong, “the promotion of the ‘Peppa Pig’ is a combination of online and off-line, King Bee has a closely cooperation with eOne, Give full play to their respective strengths.” Online, we rely on a variety of platforms, such as Weixin, Weibo, MeiPai, and official flagship stores. Off-line, we take ‘Peppa Pig’ characters to shopping mall to have several meeting promotion events. We have some new attempt this January, eOne has made a series WeiXin facial sticker, quickly attract a large number of fans to download. And on Weixin, there are two sets of "Peppa Pig" sticker now.

The most important step for KingBee to be promoted off-line is the work with Toys R us. “‘Peppa Pig’ is a new character internally; It's not easy to get into the ordinary channel quickly. But Toys R us has a Global market layout, have deeper comprehensive of the exotic characters. Since ‘Peppa Pig’ has been widely praised in many regions of Asia, at the end of 2015, Toys R us became the exclusive sales partner of ‘Peppa Pig’ in China and start a promotion period for 6 months. “According to John, they made a brand visualized Shoppe for ‘Peppa Pig’, sales of more than 80 stores across the country, seen a significant rise in sales.

‘Peppa Pig’ toys mostly are mainly made of plastic and plush, the playsets occupied the categories, because this kind of toy allows the child to fully learn the family's idea of Peppa Pig ‘’ in the role-playing process. As a result of the cartoon and the sale of derivative toys getting popular, King Bee is ready to continue to expand its sales channels and markets by this year's trend. 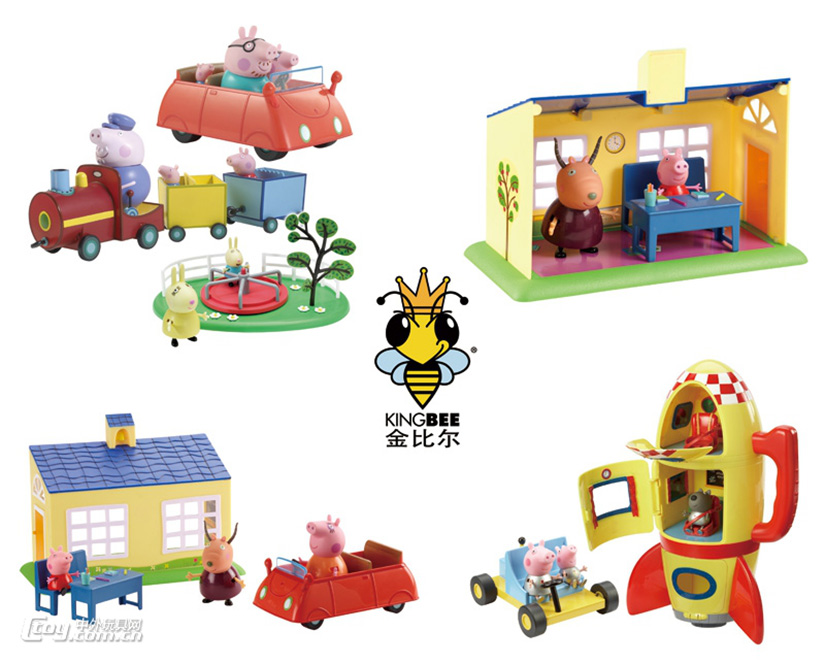 “2017 we have a publicity focus to promote with the brand side in different festivals. Besides, more derivative toys for two-to-six-year-olds, more neutral and more educational elements, will also be available, hoping that ‘Peppa Pig’ will become a part of children's lives in China” , said by John Tong. This year's ‘Peppa Pig’ products will no longer be limited to the high-end market, but rather to increase the medium-end products in response to the diversification of domestic channels. “Because Peppa Pig is a healthy character, we look forward an expansion in both distribution and market.” John Tong mentioned specifically, toys need innovation, you choose to do the licensed toys, and you got to have courage to try, now and then, King Bee will continue cooperate with family’s idea. “It is said that, King Bee will carry lot of ‘Peppa Pig’ new product to meet the public at Guangzhou Toy’s affair during 8th April – 10th April (Booth 1M01).